In this C program, we will explore how to check if a character is an alphabet or not.

The Input screen asks the user to enter a character value to check whether it is an alphabet or a non-alphabet character.

We will learn this program using ASCII values.

Every character in C programming holds a particular ASCII value that ranges from 0 to 127.

Thus, we will use this condition in the below program, and if the character entered by the user lies in the range of either lowercase or uppercase alphabets, then it will be considered a character. 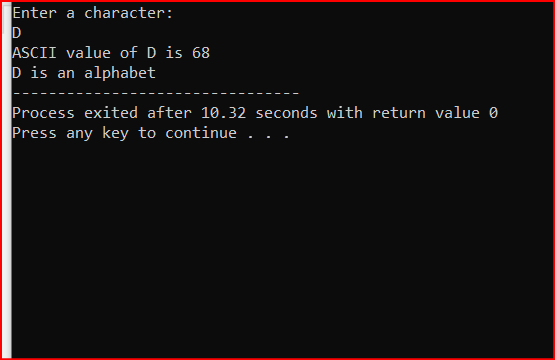 The character value entered by the user is stored in variable ‘c’.

The above statement looks like we have assigned character ‘c’ in the variable ‘Alpha’ of the int type, which is impossible since both belong to different data types.

The above statement is used to type caste the ‘char’ variable ‘c’ to the ‘int’ variable ‘Alpha’. Since we know a character holds an integer value thus, that value will be assigned to ‘Alpha’.

In the first output, the character is ‘+’, whose ASCII value does not lie in the given range.

In the second output, the character is ‘D’, whose ASCII value lies in the given range.