C program to check whether a number is positive or negative

In this C program, you will learn how to check if a number is positive number or negative.

The value is entered by the user, and that particular value is computed under some conditions. 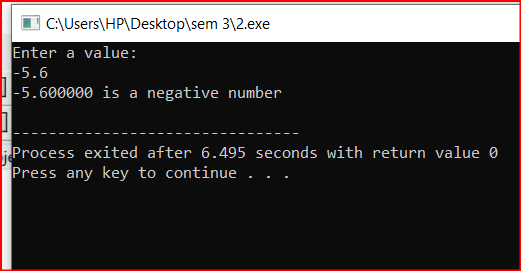 To generalize the code, we take input from the user as a float type value.

The value of the variable ‘number’ entered by the user is -5.6. Since it is less than 0 that’s why the first two ‘if’ and ‘else if’ statement doesn’t get executed.

Else condition becomes true, and the statement written inside the body of this statement is executed.