ASCII – American Standard Code For Information Interchange. According to this scheme, there are 256 characters (including special characters) in a programming language, and every character is represented by a numeric value known as ASCII value.

When we want to print a character, we use %c, which will display the character value. If in place of %c, %d is used, its integer value, i.e. the ASCII corresponding to that particular variable, will be displayed. 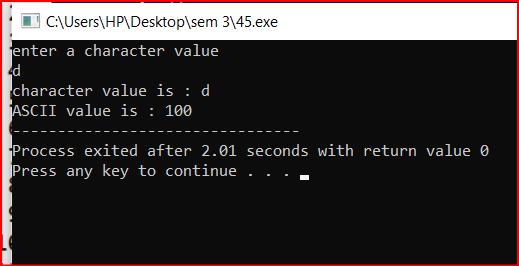 (In the scanf() function, we will use %c because we want to input a character value.)

This portion is significant because we know what gets stored in the memory block allocated to a character variable and how the compiler knows about the character value, i.e., their ASCII values.