In the previous article, we have seen how to declare a statement as an integer type. The declaration of a variable is a must to use in a program. In the English language, we have a group of alphabets. In the number system, we have a variety of numbers like rational, decimal numbers, integers, etc. Classifications are also made in programming languages so that the compiler knows how the programmer wants to use the data. These classifications are achieved with the help of Data Types in C.

Basically, data types are used for assigning a particular type to a variable.

In the above code,

int a is a declaration statement for a, which declares that variable ‘a’ belongs to the integer type of group, and it will store an integer value in itself. Moreover, we discussed earlier that it would allocate some space in the computer’s memory to store that integral value.

The amount of space allocated will completely depend on the compiler.

This statement is assigning a value (100) to the variable declared, i.e. ‘a’. In short, ‘100’ is the integer stored in the space allocated to the variable ‘a’ in the memory.

We can assign different values to ‘a’ like a=z or a=5.55 etc. For such changes, it is mandatory to change the type used in the declaration statement.

For assigning a character value to the variable declared, we use char before that particular variable in the declaration statement. For decimal values, we use float or double.

Words like int, char, float, double are the keywords of C languages, and the compiler is familiar with such keywords.

%d, %c, %f are the format specifiers which tell the compiler what type of data is in a variable. They are used while taking input from the user using scanf () or printing any message on screen using printf ().

%f is used for float datatype

%u is used for unsigned int datatype

This will be more clear with the code written below

In the example above, three declaration statements define three variables a, b, and c as integer, float, and character, respectively.

%d is used to print the integer value that is stored in ‘a’,

%f is used to print the float value that is stored in ‘b’,

And %c is used to print the character value that is stored in ‘c’. 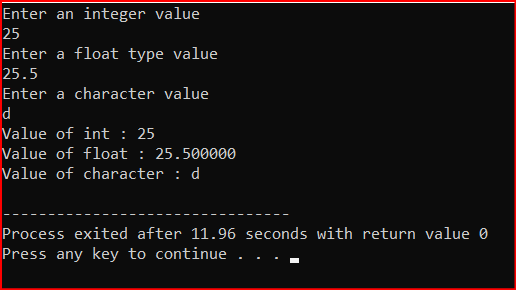 In output, you can observe that the format specifiers used in printf( ) statements are replaced by the values assigned to their respective variables.

Now, here is a question for the readers:

But we users can use any number to which we have to round our decimal/float value. For example, to round our value to 3 decimal places, we will use ‘%.3f’ instead of ‘%f’ in the printf() statement. 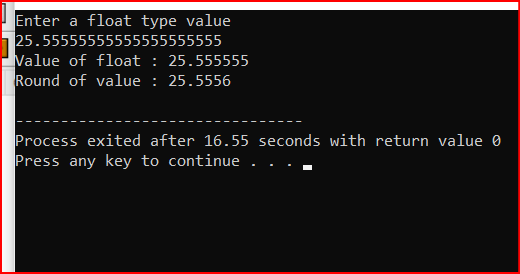 Try to make some changes in the code to understand better.

Note: char (character) values are given inside ‘’ while assigning a character value to a variable.

‘x’ is a variable with char datatype, and r is the character value assigned to x, written inside ‘’.

Now, we have just seen the data types for storing integers, characters, etc. However, integers are positive as well as negative. So, signed and unsigned are the terms used to differentiate variables that take positive values, negative values, and both.

A signed keyword is used for those variables which can take positive and negative values.

An unsigned keyword is used for those variables which can take only positive values, including zero.

It is important to note that signed and unsigned keywords are only used with ‘int’ and ‘char’ data types.

If we declare a variable ‘x’ as

Note: By default, all declared variables are signed. So, we can avoid the use of signed keywords for the variables in our code.

All code above is written without using signed keywords.