Difference between Union and Structure in C

It is very important to understand the difference between structure and union because it is the one and the only thing that differs both of them from each other. Let’s see a Program before going into the theory part. 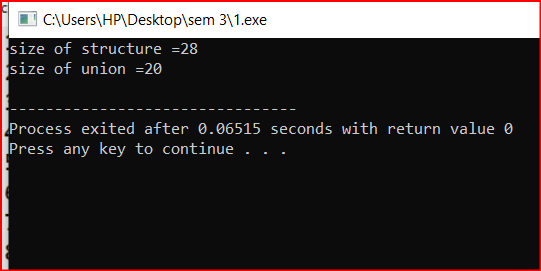 The above program output shows the difference between structure and union, i.e., their sizes.

In the structure, the sum of the memory sizes of all its members is the amount of memory required to store it. Three members of the structure are numeric, alpha, and decimal. Since numeric and decimal are of type ‘int’ and ‘float’ respectively thus, their size is 4 bytes each, alpha is of type ‘char’ with array size 20, and thus its size becomes 20.

In union, the memory size will equal the member’s size occupying the maximum space in the memory. We have 3 members of the union that are numeric, alpha, and decimal of type int, char, and float, respectively. Since the size of numeric and decimal is 4 bytes each and the alpha size is 20 bytes (20* size of char=20*1=20).

Therefore, the space occupied by the union is 20 bytes.

Rest all the other members will contain some garbage value.

On the other hand, there is no such limitation of accessing one member at a time.

Different memory spaces are allocated to each member of the structure. Thus, we can access all the members simultaneously.