From declaring a variable to printing something, to decision making, to iterations using loops, we have learned many basic concepts of C language till now. This and the next few chapters are going to be new but related to our basics. In this article, we will learn about Functions in C.

A function in C is a set of instructions/statements grouped as code with a particular name. It can be called by its name anytime and anywhere in the program whenever needed.

For example, a user wants to maintain the record of the candidates based on their voting eligibility. So, he will make a function with a code that asks for necessary details like the candidate’s age, etc., and gives output. Thus, whenever a candidate arrives, there is no need to write the whole code again, just call the function and proceed accordingly.

Why functions in C?

The above example gives a relevant answer to this question. Functions reduce the workload of programmers and save time. In short, rewriting the same code can be avoided by using functions.

Benefits of functions in C

Types of functions in C

There are two types of functions:

Library functions are t functions that are pre-defined in the C library and are used by the programmers whenever needed. ‘printf()’ and ‘scanf()’ are predefined functions that have already been used in our programs.

Moreover, using such library functions has many advantages like they work very well and are easy to use. These predefined functions save users time. Printing anything on the screen, taking the output from the user, and many more are already defined. This enables the programmers to work efficiently.

While writing a program, we make many functions according to our needs so that our code runs well. All such functions defined by the user are user-defined functions.

How to declare a function in C?

A function is declared as follows:

To calculate the area of a rectangle having two dimensions length and breadth. The ‘area’ function is declared as

Here the function named ‘area’ is declared, taking ‘length’ and ‘breadth’ of float type as input and returning the area value of type ‘float’.

The function named ‘average’ is declared, which will return the average value of type ‘float’ after calculating it from two inputs ‘a1’, ‘a2’ of type ‘int’.

The calculated value of ‘length*breadth’ will be assigned to ‘A’.

return A; this function will give us the value of ‘A’, which type ‘float’.

Calling a function in C

Till now, we declared a function and defined it according to our use. The function can be called in the program once or more according to the user’s need.

When a call is made, the control will move to that function, and the code written in its definition will be executed. After that, the control passes to the main program.

‘area’ function can be called as

So, now that we are ready with functions, let’s write a program to find the area of a rectangle. 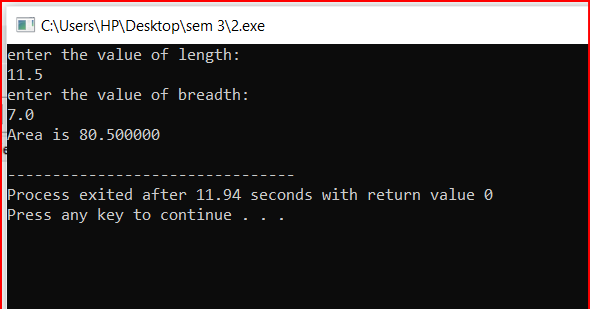 The function named ‘area’ declared with ‘float’ type with 2 arguments of ‘float’. It means that while calling, we must parameters pass two ‘float’ inputs, and we will get a ‘float’ output in return.

Now come to the ‘function call’ statement in the ‘main’ function.

When the compiler reaches the function call,  it searches for the ‘function definition’, written after the ‘main’ function in the above function.

‘Function definition’ can also be made after declaration. 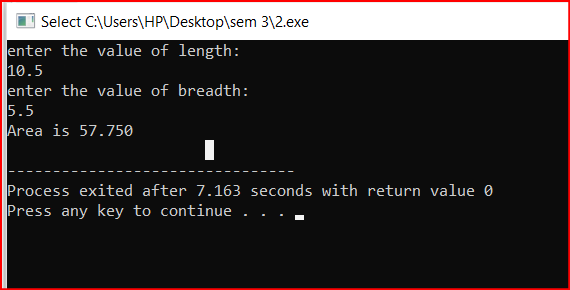 The function definition is made with its declaration. So in this case, while executing ‘main’ the compiler will know that there is a function named ‘area’ because it is defined above from where it is called.

One more example of a function is given below: 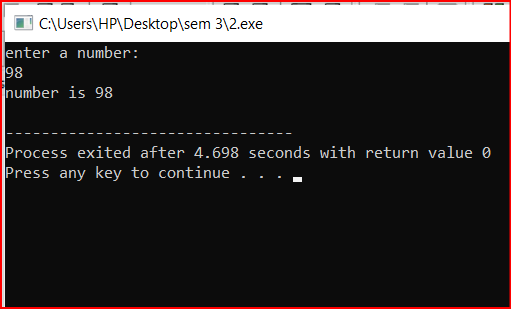 The function definition is also possible without passing any argument. See an example of this.

void display ( ), This function has empty ‘( )’ brackets, which means that we are passing no arguments in the function ‘display( )’.