Microsoft in 2008 came with a cloud computing service and named it Windows Azure which was later known as Microsoft Azure. Till 2018, developers using Azure or non-azure service was provided with a code version control tool called Microsoft TFS, which was later upgraded and called Azure DevOps. Likewise Azure, Azure DevOps too is a cloud-based service used mainly for version control and project planning.

What is Microsoft Azure

What is Microsoft Azure DevOps

The architecture of Azure DevOps lifecycle

Azure DevOps lifecycle includes almost all the services that we have discussed above. It starts with project planning, and the task is created for developers using Azure Boards. Then the developer starts coding in an IDE with the help of branches created over Azure Repos. Once the development is completed, then the user creates a CI/CD pipeline using Azure Pipelines and deploy it in the required environment. Once the deployment is completed, tasks are created for testers who use Azure Test Plans to execute the tests. These steps are shown in the image below: 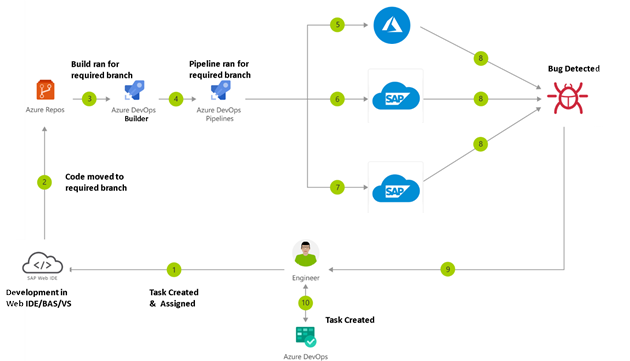 The above diagram shows end to end lifecycle of our CICD pipeline, including all other Azure DevOps steps.

Microsoft TFS (Team Foundation Server) was introduced by Microsoft to manage high volume codes for big organizations. Later, with the introduction of Git in the market and an increasing number of Git users, Microsoft integrated it too and launched a tool called Azure DevOps. Let’s discuss all the differences between Microsoft Azure DevOps and Microsoft TFS: