Parallel Cursor in ABAP is a way to modify the conventional nested loop in such a way that the overall performance of the ABAP program gets improved.

The above code will work fine and will print Employee ID, Month of the Salary and Amount of the salary of each and every employee. 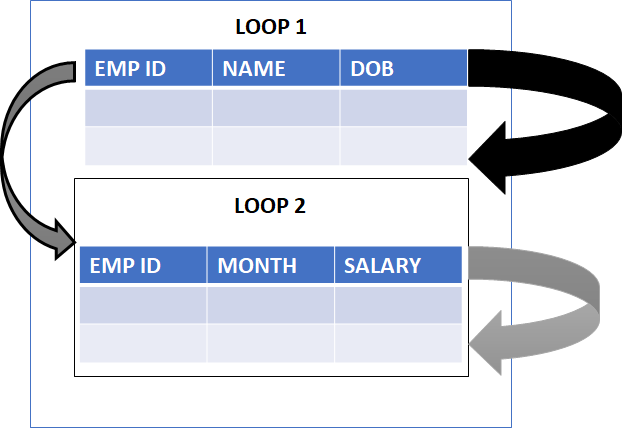 What if you want to find Salary Amount of one person for a particular month? You will again write the same loops to find the required details.

Also, for every new Employee ID, the second Loop still goes through the whole data.

To curb this problem, a concept called Parallel Cursor was introduced by SAP ABAP.

According to Parallel cursor concept, we need to follow following steps:

Step 01: Sort both the tables

Step 02: Write the first loop, like the previous way itself.

Step 03: Read the second table with the key that was required to search the data. This would give the first value regarding the key and also its position in the table [SY-TABIX].

Step 04: If the above step executed successfully, it means data is there in the second table associated with the key. Hence the SY-SUBRC will be set to zero. In this step we will check the value of SY-SUBRC. If it is zero, than we will proceed.

Step 07: In this step we check if the key of first table is equal to the key of second table or not. If not, then exit the loop. This stops the loop from reading non required data.

Step 08: In this step we write our actual logic or print statements. And then close both the loops.

Let us implement parallel cursor algorithm in the last example we discussed.

lv_index = SY-TABIX. (you need to declare this variable earlier only) [Step 05]

We use cookies to ensure that we give you the best experience on our website.Ok